Skip to content
Directions (1-5): Study the following information carefully and answer the question given below:
There are seven persons G, H, I, J, K, L and M who were born on the same day of the same month of different year i.e. 1974, 1936, 1957, 1962, 1972, 1979 and 1982 but not necessarily in the same order. Each of them lives on different floors of the same building having eight floors (the ground floor is numbered as the first floor while the topmost floor is numbered as the eighth floor). One of the floor is vacant
Note: Their age is considered as on the same month and day of 2017 as their date of births.
M is younger than H. I neither lives on Fifth floor nor on Eighth floor. Difference between the ages of I and J, who lives Fifth floor is two years.  Age of the person who lives on the topmost floor is greatest amongst those whose age is a multiple of five. L either lives on sixth floor or on seventh floor. K is older than the person who lives on Third floor, who is not the youngest. K lives above the floor on which L lives. The difference between the ages of H, who lives on First floor and I is one more than the square root of the age of one of the persons. The one who was born in 1972 does not lives on Third floor. Age of K is not an even number. M is not the youngest. J lives above M and there is only one floor between J and M. There are only five floors between G and I. 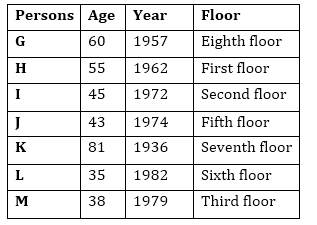