Skip to content
Direction (1-5): Study the following information and answer the questions given.
Eight actors I, T, F, O, E, D, L and K are sitting around a circular table. Three of them are facing outside the centre and other five are facing towards the center of the table. T is sitting to the third right of D. F is sitting to the third left of O, who sits second right of I and among F, O and I, one is facing opposite to the centre of the circle. Two actors are sitting between K and E and two are sitting between D and E. F is sitting to the second left of L, who is facing the centre of the circle. The person who is immediate left of F is facing towards the centre. O is not an immediate neighbour of K. E is not opposite to D and F. 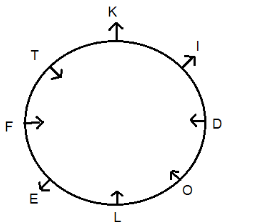