Skip to content
Direction (1-5): Read the following information carefully and answer the question given below:
There are eight persons W, X, Y, Z, M, L, J, and K sitting around a square table. Four of them are sitting at corner of the table and rests are sitting at middle of the table. Those who sit at corner face inside the centre and who sit at middle face outside the centre. They like different colours i.e. red, yellow, pink, white, grey, brown, peach, and green (not necessarily in same order).
J sits second to the right of W, who likes brown. K is an immediate neighbour of W. Y sits second left of K, who likes red. Three persons sit between Y and M. The one who likes white sits second right of M. X likes green and doesn’t sit just near to Y and K both. L doesn’t like white. The ones who like peach and pink face each other. L likes yellow. M doesn’t like peach. Z doesn’t sit just near to L. 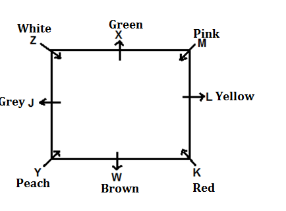