Skip to content
Directions (1-5): Study the information and answer the given questions:
There are seven friends namely P,Q,R,S,T,U and V,  who are doing engineering in different streams i.e mechanical, electrical, chemical, electronics , IT, computer science and civil but not necessarily in the same order. All of them studies in  three  different colleges i.e IIT madras, NIT Patna, IIT Kharagpur. At least two friends study in each college.
P studies in IIT madras but not computer science or IT. T studies chemical. Neither  Q nor S has electrical   as stream. V studies electronics. The one who studies in IIT madras has mechanical stream but it is not P.   S studies neither IT nor mechanical .S  does not go to IIT Kharagpur. R goes to NIT patna with only one other friend who has electrical stream. 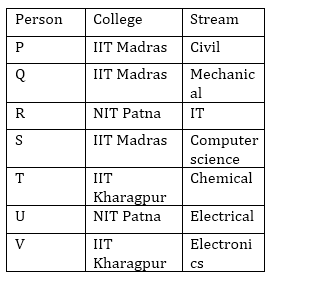