Directions (Q. 1-5): Study the following information carefully and answer the questions given below:

There are eight persons D, E, G, H, R, S, T and U sitting  around a circular table. Some of the persons are not facing the centre. They all like four different types of drinks, viz sprite, Slice, Limca and Pepsi, and each drink is liked by two persons, 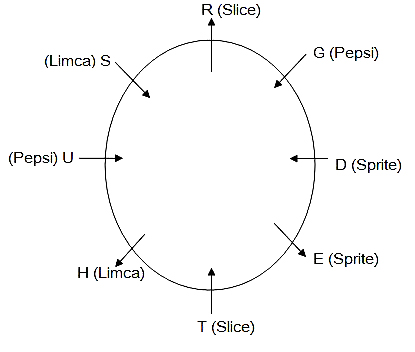 2). How many persons are not facing the centre?

3). Which of the following statements is true about D?

a)D is an immediate neighbour of G and the person who likes Slice.

b)The immediate neighbours of D are facing the centre.

c)D is third to the right of the person who likes Limca.

d)None of the given statements is true

e)D sits opposite U, who likes Pepsi.

4). Who among the following sits third to the right of U?

5). Four of the following five are alike in a certain way and hence form a group. Which is the one that does not belong to that group?