Directions (1-5): Study the following information carefully and answer the given questions.

There are nine people Balaji, Darshan, Kalam, Sethu, Bilal, Ramnath, Lalit, Yuvan and Nakul who sits around a circular table. Some are facing towards and some are facing away from the centre. They like different pens among Parker, Cello, Camlin, Hero and Montex. Not more than 2 people like the same pens. The following information is known about them. Kalam and Lalit form the only pair that is sitting together and like the same pens. They are facing in opposite directions to each other. The one who likes Camlin sits third to the left of Darshan but is neither Kalam nor Ramnath. Balaji sits second to the left of Ramnath, who likes Cello. The one who likes Parker is an immediate neighbour of Yuvan and Bilal but none of them sits adjacent to Kalam or Lalit. Balaji, Nakul and Yuvan face in same direction as that of Bilal. Nakul sits third to the right of Sethu, who is facing away from centre and likes Hero. Bilal sits second to the left of Kalam and likes Cello. The people who like Cello face towards the centre. Balaji neither likes Camlin or Hero. 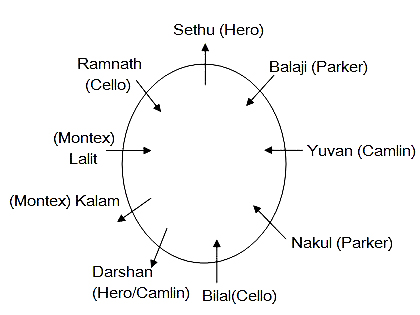 Q1). Who sits second to the right of Darshan?

Q2).  Which of the following person likes Parker?

Q3). Which of the following pen like by Yuvan?

Q4). How many persons facing outside the circle?

Q5). Which of the following combinations is true?