Directions: Study the following information carefully to answer the given questions :
‘Six flags Red, Blue, Yellow, Green, Black and White are hanged in different floors of a building but not necessarily in the same order. The ground floor is numbered I and the floor above it is numbered II and so on and the topmost floor is numbered VI. Green flag is immediately above Blue. Yellow is below Black and White. Blue flag is not on the I floor. Yellow is between Black and Green. Black flag is not on the topmost floor.

Directions : The following questions are based on the diagram given below : 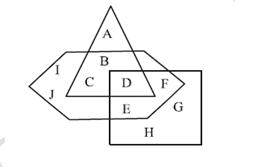 Directions (1-5) Which of the phrases (1), (2), (3) and (4) given below each sentence should replace the word/phrase printed in bold in the sentence to make it grammatically correct? If the sentence is correct as it is given and no correct is required, make (5) as the answer.

Directions (6-10) Rearrange the following six sentences A, B, C, D, E and F in the proper sequence to form a meaningful paragraph, then answer the questions given below them.
1. While the reference point for the former is the state, for the latter it’s society.
2. India’s ‘strategic community’ comprises two distinct circles with little overlap.
3. Consequently, mainstream strategists have an external orientation to their discourse, concentrating on high politics; the latter is more internal oriented.
4. Their prescriptions too are understandably poles apart and thus, the state, to which both their commentary is directed, has to play balancer, and ends up being at the receiving end of criticism from both sides.
5. Out of the two, one can be termed the ‘mainstream’ and the other ‘alternate’.
6. To further elaborate on the external and internal concept – while one is enamoured of India’s rise and place in the global order, the other is more sensitive to its vulnerabilities and inadequacies.