Directions (1 – 5): Refer to the information given in the graphs below and answer the questions that follow.Number of points earned by six different TV’s


Directions (6-10): The bar graph given below shows the percentage distribution of the total production of a car manufacturing company into various models over two years.
Percentage of six different types of cars manufactured by a company over two years 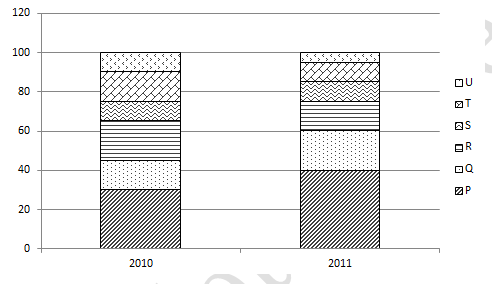 Directions (Q. 1-10): In the following passage, some of the words have been left out, each of which is indicated by a number. Find the suitable word from the options given against each number and fill up the blanks with appropriate words to make the paragraph meaningful.
The social (1) of the Web lifestyle and work style are enormous. A lot of people (2) that computers and the Internet will depersonalize experience, creating a world that is less warm. But these are unfounded as we know that some people were (3) afraid that the telephone would reduce face-to-face contact and will (4) society to fall apart. But the (5) actually came true. Just as phone and e-mail have increased contact between people living in different communities and between people on the go, the PC and the Internet give us (6) way to communicate. They do not take any away. In reality, the ability to use the Internet to redefine (7) in our communities is strengthening personal and cultural (8). The Web lifestyle is about broadening (9), not narrowing them. Community building is going to be one of the biggest growth areas on the Web. It dramatically increases the number of communities you can bond to because of its ability to (10) groups of like-minded people independent of geography or time zones.