E sits second to the right of the B. B faces the centre. Only two people sit between E and C. C is the daughter of A. No female is an immediate neighbour of C.

C’s brother sits to her immediate right. Neither B nor F is the brother of C. A’s wife sits to the immediate right of E. A sits second to the left of his wife.

Only three people sit between A and his brother. Both the immediate neighbours of C face opposite directions.(i.e if one neighbour faces the centre then the other neighbour faces outside and Vice-Versa)

C’s husband sits to the immediate right of G. E and F face a direction opposite to that of A(i.e if A faces the centre then E and F face outside and Vice-Versa) 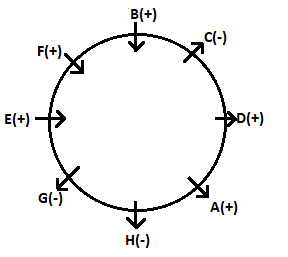 1. How many people sit between B and G’s son in law when counted from the left of B?
A.Five
B.Three
C.Four
D.Two
E.One

3. Which of the following statements regarding G is definitely correct?
A.G is the sister of E
B.G sits second to the right of F
C.B and A are immediate neighbours of G
D.None of the given options is correct
E. All are true

5 .Who amongst the following sits third to the right of E?
A.F
B.E’s father-in-law
C.E’s Nephew
D.E’s wife
E.E’s father