Directions (1-5): Study the following Pie Graph carefully and answer the questions given below. 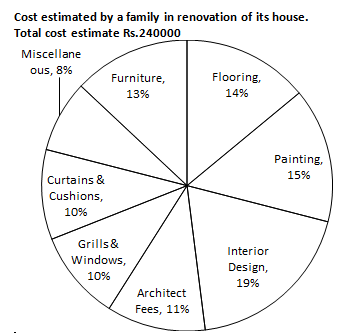 Q3. What is the difference in the amount estimated by the family on Interior Decoration and Architect Fees (In Rs.)?

Q4. What is the cost estimated by the family on Painting and Flooring together (In Rs.)?

Q5. The family gets a discount on Furniture and pays 12% less than the estimated cost on Furniture. What is the amount spent on furniture (In Rs.)?

Directions (6-10): Study the following table and answer the questions given below.

Q7. Which of the following statements is/are true?

I.The revenue has shown the highest growth rate for company B.

Q9. Which of the following statements is/are true?

III. Revenues of company A is growing fastest during the period shown above.

Q10. What was the total Revenue of software companies other than those mentioned in the table in 2009 in crores?

Q1. Conclusions:
I. Some groundnuts are not onions.     II. All lemons are groundnuts is a possibility.

Q2. Conclusions:
I. Some lemons which are groundnuts are also a part of onions     II. No onion is coconut.

Conclusions:
I. Some radios are not juicers.     II. All refrigerators are radios is a possibility.

Statements (6-10):
Some mobiles are calculators.     All calculators are machines.     All equipments are mobiles.

Q6. Conclusions:
I. No equipment is machine is a possibility.     II. Some machines which are mobiles are also a part of equipments.

Q11. How is P related to J?
I. M is brother of P and T is sister of P.
II. P’s mother is married to J’s husband who has one son and two daughters.

Directions (6-9) Read each sentence to find out whether there is any error in it. The error, if any, will be in one part of the sentence. The number of the part is the answer. If there is no error, the answer is ‘5’. (Ignore errors of punctuation, if any).

Q8. A skillful advertiser may be able to create (1) / practically a monopoly for himself. (2) / not because his product is superior to (3) / but because he has succeeded in inducing people to believe that it is . (4)/ No error (5)