Directions (Q. 1–5) : Study the following information carefully and answer the questions given below :

Six persons A, B, C, D, E and F are six representatives from different states viz Gujarat, Uttar Pradesh, Uttarakhand, Jammu, Bihar and Maharasthra, but not necessarily in the same order. All these wish to arrange the summit in six different months viz January, March, May, June, August and December, but not necessarily in the same order. They all have different coloured symbol. Two of them have red symbol and two have blue. Others have either green or yellow symbol.

A) Neither F nor B is from Jammu or from Bihar.

B) A has red mark but not arranging summit in August, May and December.

C) The person, who is representative of Uttarakhand, arranging summit in December.

D) E is from Gujarat but neither has green nor red mark.

E) Representatives from Maharashtra and Jammu have red and yellow coloured symbol respectively.

F) C is the representative from Uttar Pradesh and arranging a summit in March and his symbol is green.

G) F does not arrange summit in December. 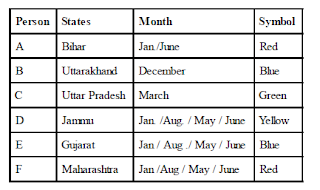 1. Who among the following is the representative of Jammu ?

2. Uttarakhand is represented by –

5. ‘A’ is representing which of the following state ?